On view until 9 January 2022
Open Air and Formal Garden

“Yorkshire Sculpture Park is delighted to show this bronze sculpture of Captain Sir Tom Moore before it is permanently placed at Chapel Allerton Hospital in Leeds. During the dark days of the pandemic, we all became aware of Captain Tom’s extraordinary fortitude when – aged 99 – he set out to walk 100 lengths of his garden. He captured the nation’s heart and gave hope and inspiration to all. It is fitting that this Keighley-born man, who was put to rest in his hometown, should be celebrated in Britain’s best-loved sculpture institution where many thousands will be able to see Andrian Melka’s sculpture and to pay tribute to ‘Captain Tom’.” said Clare Lilley, Director of Programme, Yorkshire Sculpture Park

A Way Forward, by sculptor Andrian Melka, pays tribute to Captain Sir Tom Moore’s NHS fundraising achievements and his endeavour to inspire others to find a way forward during the Covid-19 pandemic. The bronze figure is temporarily presented at Yorkshire Sculpture Park before relocation to its longer-term home at Leeds Teaching Hospitals NHS Trust. There it may offer motivation to those attending the Chapel Allerton Hospital, as patients or visitors, through its embodiment of determination and self-belief.

Melka is a Yorkshire-based sculptor, born in Albania. He left his country of birth as an adult in 1997 during a period of civil war with a graduate degree in monumental sculpture from the Academy of Fine Arts in Tirana. He arrived in London on a Getty Foundation-funded scholarship, studying at the Building Crafts College to develop his masonry skills. Founded by the Worshipful Company of Carpenters in 1893 to train young people in a range of construction crafts in central London, the College relocated in 2001 to Stratford near to the Olympic Park. Until recently Melka has worked primarily in marble and stone, which he directly carves. Past commissions include the Golden Jubilee Fountain at the Royal Family’s Sandringham Estate; the Figure of Christ on the Cross for Bamburgh Castle War Memorial, and a replacement of the Medici Venus at Chiswick House in London. More recently Melka has expanded his range of sculptural media to include bronze.
“Captain Tom represented hope and determination during the early days of the pandemic when many felt their world being turned upside down. This two-metre high statue pays tribute not only to his incredible fundraising achievements, but to his ability to inspire others to put one foot in front of the other and find a way forward during the most challenging of times.” - Andrian Melka.

His figurative sculpture, shaped in clay before casting, captures a distinct likeness of his internationally renowned face concentrating on each step. His stance here, giving a thumbs-up, became an iconic pose. It can be seen to represent a patriotic and nostalgic inclination towards UK identity and the traits we value at times of national crisis, adversity and struggle. For some it may recall the experience of the nation coming together during war.
Captain Sir Tom Moore, fondly known as Captain Tom, was born in Keighley, West Yorkshire in 1920. He was educated at the local grammar school before

Starting an apprenticeship in civil engineering. In May 1940, eight months after the start of WWII, Moore was conscripted in the 8th Battalion, Duke of Wellington’s Regiment, stationed at Weston Park in Otley. Though Moore was a war-time veteran who served in India and Burma between 1941-45 before returning to become an instructor at the Armoured Vehicle Fighting School in Dorset, he became a public figure at the age of 99 fundraising in aid of NHS Charities Together. Capturing media attention and consequently the hearts of the nation, Moore set out on 6 April 2020 with a goal of raising £1,000 by walking one hundred lengths of his garden in the days leading to his 100th birthday on 30 April that year. In less than one month, Captain Tom raised almost £33 million.

The figure of Captain Tom is Melka’s first bronze work made at this scale (larger-than-life), cast at a foundry in London with the support of donations from hundreds of individuals. The names of donors or their loved ones lost during the pandemic appear on the sculpture’s base and on the frame that Captain Tom pushes. 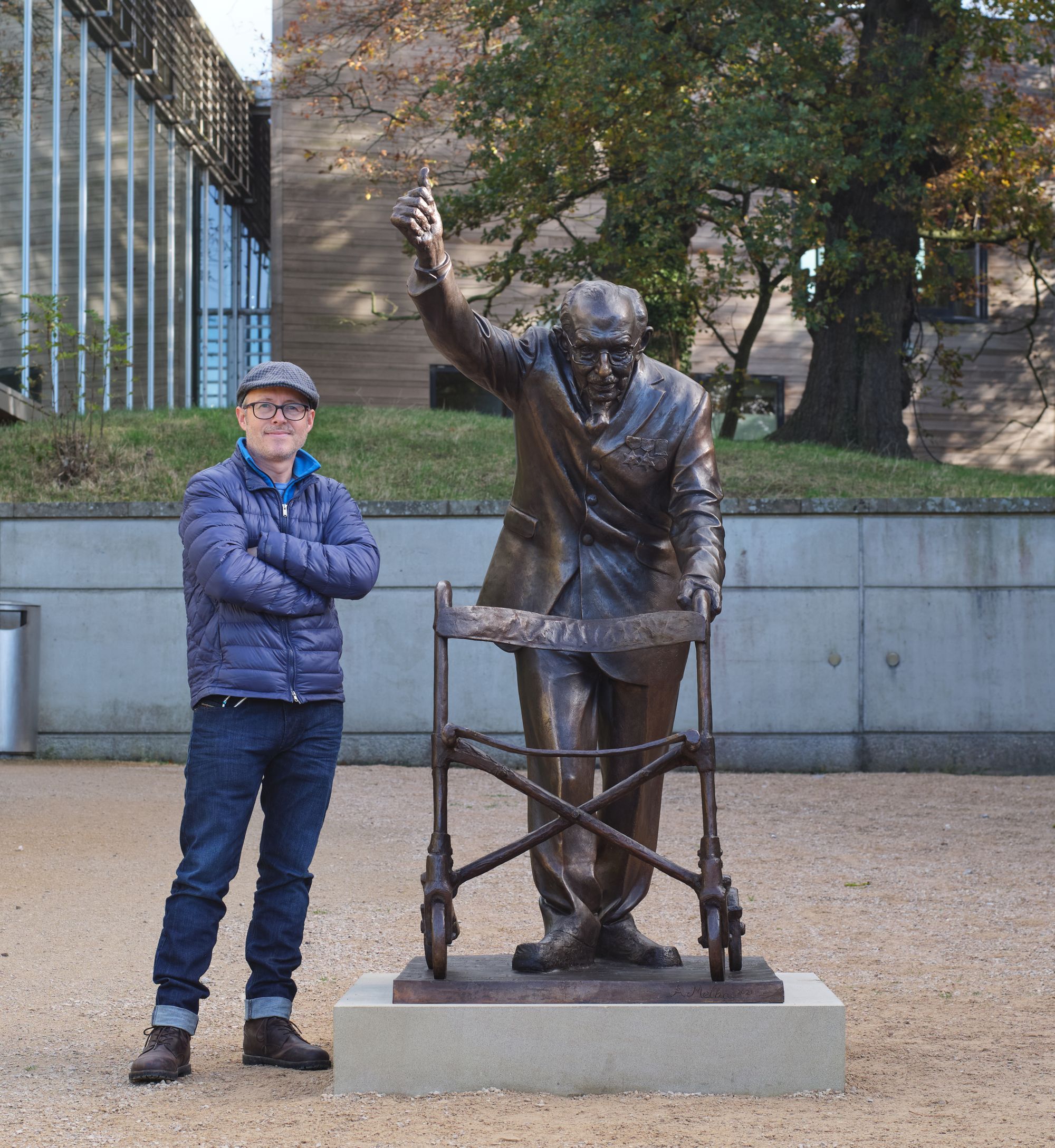 Find out what it's like to coach Richard Branson