New additions to the open-air display:

This festive season, YSP offers a much-needed opportunity to escape to an inspirational and safe environment where you can experience art and nature.

There are around 100 sculptures to encounter, sited in parkland, woodland, formal gardens, and around the two lakes. One of the most fascinating things about seeing sculpture outdoors is the way it changes with the seasons, weather and light. Winter is the perfect time for a bracing walk around our 500 acres of beautiful, historic landscape, with thought-provoking
works and spectacular, frosty views around every corner.

There are always plenty of reasons to return to YSP: our open-air collection is made up of an everchanging display of sculptures, so you can be sure of something new to discover. We are especially thrilled to announce that several exciting additions have arrived this winter.

Taking centre stage on the Formal Garden terrace is the magnificent Bag of Aspirations by Kalliopi Lemos – a vastly scaled-up version of the famous Birkin handbag made by French fashion house Hermès. This expensive and highly-sought-after bag has become associated with luxury and exclusivity, and embodies the values and desires of a consumer culture. Fittingly, the work has recently been displayed outside exclusive shops in London’s Mayfair. Though made of steel, the sculpture skilfully captures the tactile
appearance of worn leather. Its folds and creases suggest a remarkable texture and softness, forged from this cold, hard metal. 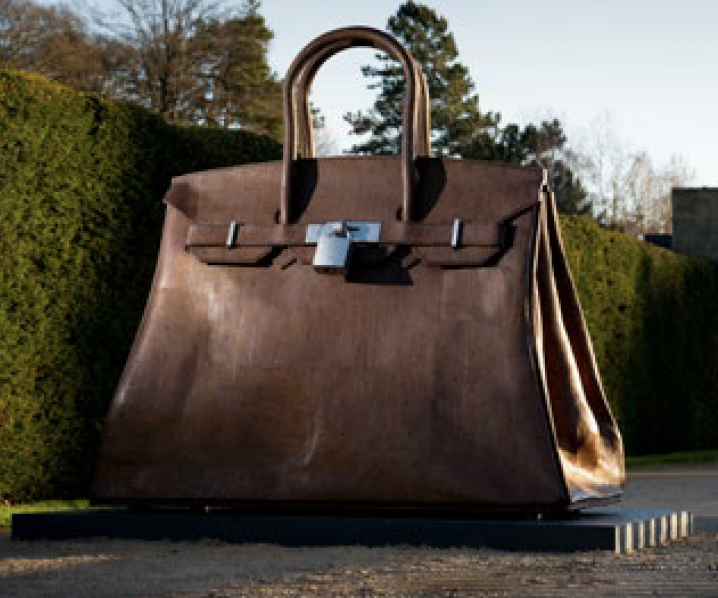 Lemos often investigates how such trends in society affect and frame women in particular, exploring the way femininity is constructed and defined by restrictive ideals of beauty and behaviour. The yearning for material things displayed in Bag of Aspirations highlights fundamental inequalities in a world where certain human lives are valued less than possessions.

Two colossal and much-loved works by Henry Moore – Large Two Forms and Large Spindle Piece – have now returned to YSP’s Country Park, the area of YSP that Moore singled out as his favourite when he visited in the 1970s, because of its rolling hills and far-reaching views.

Large Two Forms reflects Moore’s preoccupation with natural forms and textures: he had a collection of bones, shells and skulls, as well as stones and pebbles, and was captivated by how they had been shaped and sculpted by nature’s forces. These influences are clear to see in the smoothly undulating lines that shift and change as you walk around them, at times appearing solid then suddenly opening up to reveal holes that frame the stunning landscape beyond. 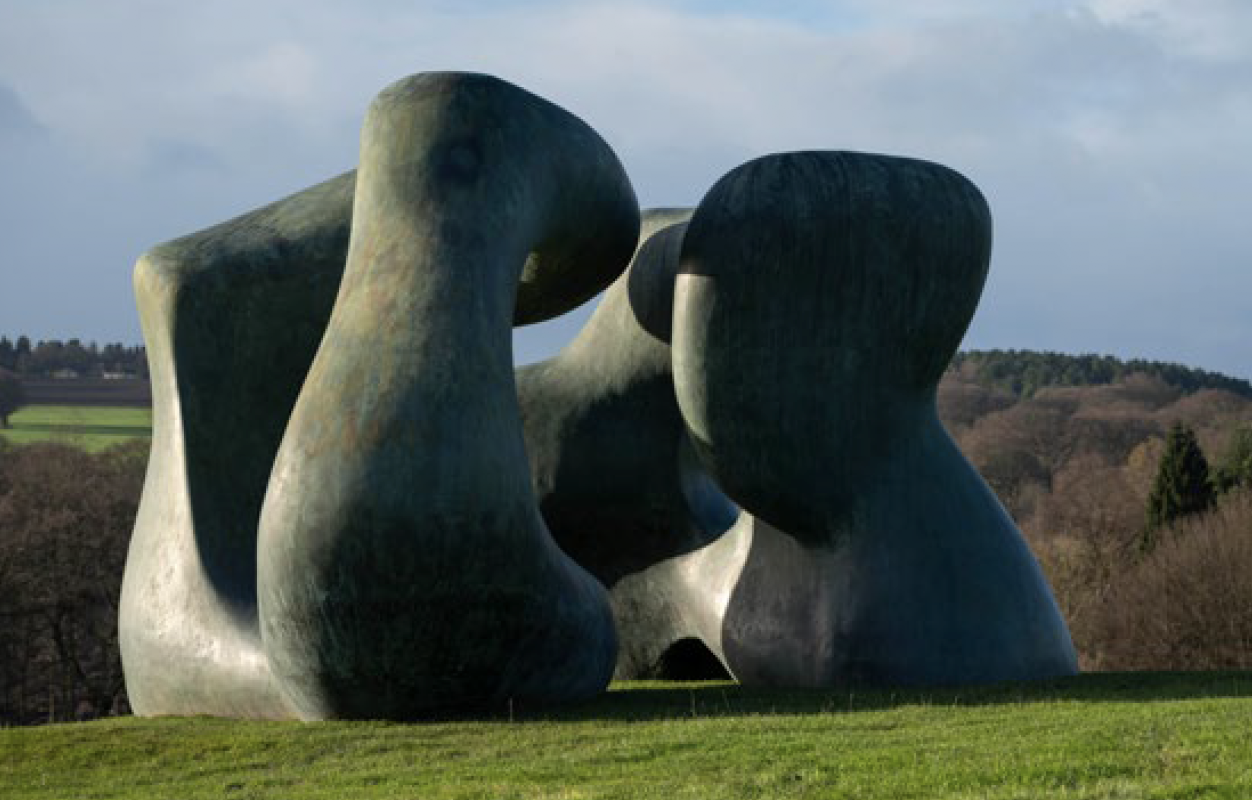 Large Spindle Piece is similarly impressive in scale and composition. Inspired by the shape of a piece of flint with protruding points that Moore found near his home, it continues a visual theme that he often revisited
of almost touching points and the tension and energy that this gesture creates.

Venture towards the bottom of the valley to find a new colossal bronze by William Tucker. The four-metrehigh Monumental Dancer After Degas captures the muscles and volume of a powerful human figure in movement. Like many of Tucker’s sculptures, this abstracted body also resembles a huge rock formation and fits perfectly within this natural environment.

In the Formal Garden, Edward Allington’s From the Sex of Metals IV responds to a question from art critic Stuart Morgan as to what sex his sculptures were. Allington made a series of four works to explore this question, and then asked: “to what strange gender does steel belong or bronze, and what is sex but the most extraordinary and elaborate mechanism for filtering fluids?” The work explores ideas of mass production and fluidity, and how metal that seems so hard and inflexible in its final form has in fact been
molten before being shaped. Allington’s sculpture combines geometric and classical architectural forms with industrial corten steel, which has rusted to a rich, dark hue.

Meanwhile on the Formal Garden pond, Gary Hume’s enigmatic Snowman, two balls twinkle white has been installed just in time for Christmas. Images drawn from childhood, including snowmen, polar bears, rabbits and owls, appear frequently in Hume’s work, suggesting the importance of figurative imagery to the artist’s explorations of structure, surface and colour. Throughout his work, conventional ideas of beauty are frequently countered by a darker perspective. The shape of this work evokes feelings of joy in childhood recollections, while the sculpture’s featureless exterior implies a sense of loss and despair. 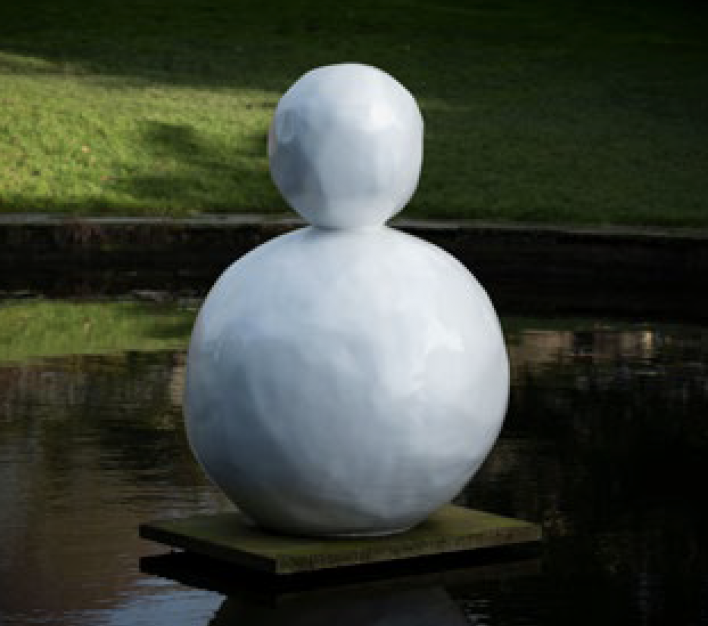 Visitors will be able to experience further additions to this changing display of open air works in 2021.

The grounds at YSP remain open to explore this winter. Advance booking is essential via ysp.org.uk/visit

Due to Wakefield being placed in COVID-19 Tier 3, the indoor galleries and restaurants at YSP remain closed at this time.

Welcome to Yorkshire announce ‘Walkshire’ as their key campaign for 2021

Something is blossoming at Junction 32