The Coronavirus Diaries: Journey to the back of my cupboard

Ok. I admit it. I was bored. Well, to be more exact, I panicked. I was in fear of becoming isolated AND bored…
So I came up with the challenge of not buying a single thing to eat or drink until my cupboards were empty.

Such stupid ideas are too easily hatched when one’s fridge is bursting at the seams. So much so that closing a packed suitcase for a month’s island hopping around the Balearics with a beauty out of Love Island would be easier than shutting the fridge door.

And so, with two above-counter cupboards stacked with a variety of hangover necessities such as the Fray Bentos pies and culinary delights for those romantic soirées that never seem to happen, it was ‘game on Nobby’.

I decided to start with the aforementioned bulging fridge. As things tumbled out in front of me, I raised the stakes. I decided to eat whatever fell out first. Luckily, this turned out to be a bag of fresh tagliatelle (not as good as dad’s, but hey) … a 500g packet of lush spinach leaves and a small tub of crem fresh.

With a tiny nudge similar to those I used to give to the penny slot machines at the fairground, I skilfully coerced the twin pack of chicken breasts out of the door.

Thirty minutes later, like some sort of alienated Alaskan tracker from another TV programmes (no offence to Alaskan trackers), I sat with my tray on my lap and devoured the most delicious pollo florentine on a bed of butter tossed, Parmesan-infused fresh tagliatelle washed down with rather too much Pinot Grigio.

With a full stomach and a little tipsy, day one ended with me feeling triumphant, to say the least.

As you can imagine, day two, three, four … and so on, were not too dissimilar. As the wine ran dry, I turned with equal gusto to my modest stock of Strongbow cider closely followed by a four pack of Stellas left over from a recent lad’s night in (note to self, don’t invite Kev again) and then the folly of my ways hit me hard.

Not only had I run out of essential booze … but all milk, eggs, bread, meat and fresh vegetables had been sliced, diced and diced again and by day 12 I was beginning to reach for the cupboard with alarming regularity.

First, it was the Fray Bentos pie. I had managed to keep this concealed from all my unsuspecting visitors for a considerable amount of time, and fearing the risk of any imminent surprises, I decided to start with this first.

OMG! With a little drizzle of the finest bisto gravy, a buttered jacket potato, over-aggressively peeled sprouts and succulent sweetcorn, this was indeed as good a Fray Bentos gourmet meal as any I have secretly devoured in a lifetime punctuated with ever-increasing occurring and totally unfair hangovers that can only be satisfied with platefuls of calorific stodge. 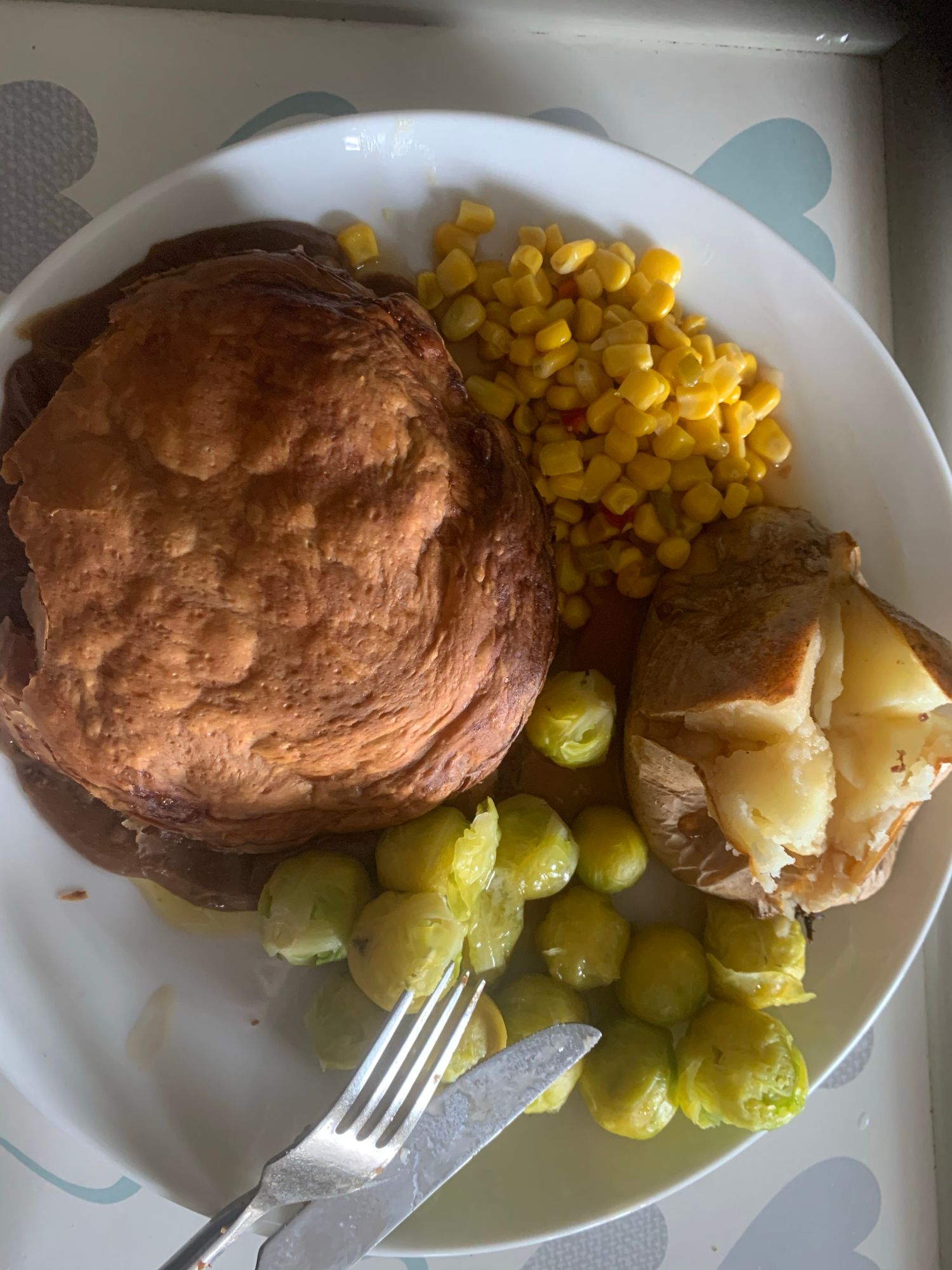 As the lockdown was extended, and the risk of impending over-curious visitors evaporated, I was left to repent my foolish ways. If only I had eaten half the pie or made the lasagne with four layers instead of five, or chopped the bacon smaller in the minestrone or limited the amount of coconut butter in the endless cuppa soups or drizzled the olive oil a la Jamie Oliver instead of ‘pouring it’ in the salad or ….

my head became mashed with a sense of foreboding as I increasingly realised I was no suburban equal to Bear Grylls and, in isolation, had no one to turn to.

My every moment became obsessed with regret and self-doubt as I lamented the innocent bruised aubergine I threw in the bin back in 2016 or the years of peeling too much off those fat Christmas sprouts. Such utter decadence.

Breakfast consisted of those packets of porridge eats I’d seen my trim colleagues devour in the office kitchen, though mine were now made with boiled water instead of milk. Garnished, however, with big, fat, juicy sultanas.

Lunches became an endless stream of packet soups, embellished with coconut butter and the very occasional garden pea scraped from the bottom of the bereft freezer.

My mind played tricks on me as I made pledge after pledge… never again would I bin the tip of a carrot, the core from the cabbage, the stalk from the broccoli or the … you get the picture.

And then, as if by Devine Intervention from him Above (note what I did there), the back of the cupboard finally emerged. With an ever increasing blurred vision and rumbling stomach, I saw it. Proudly standing to attention behind the remaining tins of flatulent invoking beans, my last tin of boiled, rejected-at-birth potatoes (yes, anything remaining had developed its own personality) the cheekiest tin of the sweetest mushy peas … the end was in sight.

The journey to the back of my cupboard was teaching me many things … not least, the importance of fresh food versus processed. 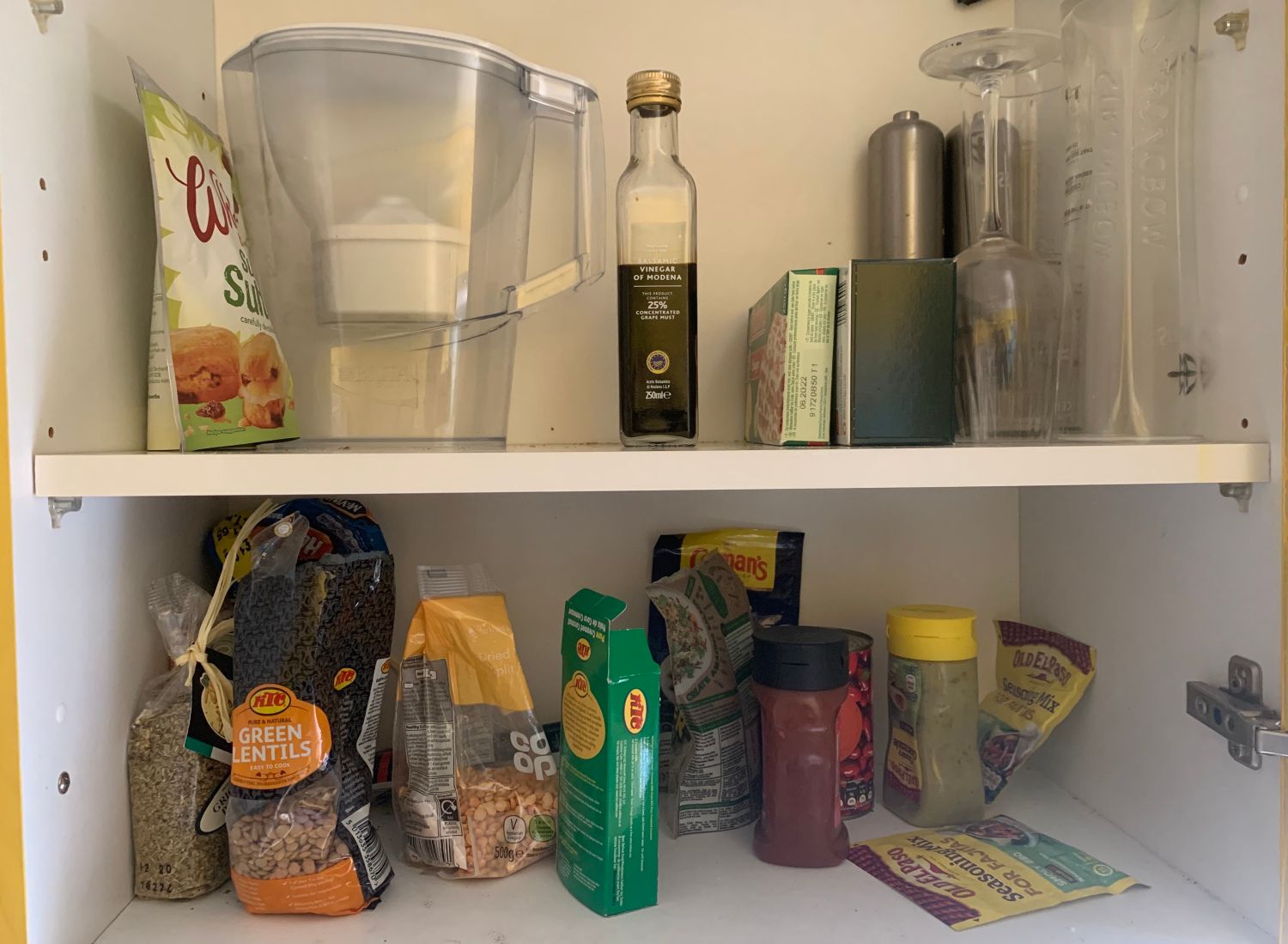 But more than the physiological lessons (we are, indeed, ‘what we eat’), it taught me that limiting our choices in life is both challenging and rewarding… probably more rewarding than challenging in my gluttonous case. I don’t mind admitting it, I have neglected my body and mind to a point of recklessness and this journey to the back of my cupboards has highlighted this beyond question.

Will it change me? Will I take these lessons into my twilight, post-coronavirus pensionable years?

Will any of us go back to who we were before COVID-19 entered our lives? There are many poor souls who will never make that journey themselves, and to them, our thoughts and prayers must go.

Welcome to the Common Room